The English word ‘orchard’ was once spelt “hortyard”, and derives from the Latin “hortus”, meaning ‘garden’ and the old English “geard”, meaning ‘yard’. In Valencia the “huerta”, although it can describe one person’s little vegetable patch or allotment, is more often used to describe the fertile coastal plain around the city of Valencia, the rich soil of which has been used to grow a wide variety of vegetables and citrus fruits for many centuries.

The “huerta is divided into three parts; north, south and west. Naturally there is no east “huerta”, because it would be under the Mediterranean Sea, with a distinctively salty soil.

The Valencian “huerta” began its long life during the Roman conquest, when it provided winter quarters and sustenance for the Roman armies who were busy conquering Iberia. In fact the city of Valencia “Valentia Edetanorum,” was founded by the Romans in 138 BC, although, being Romans, they then destroyed it in one of their civil wars 63 years later.

However, the “huerta” as we know it today was created during the reign of the Muslim caliphates between 711 and 1492, when they were expelled from the peninsular by the Christians. It was ‘the Moors’ who built the irrigation canals which turned the Valencian countryside into a farmers’ paradise (a word which comes from Arabic and means ‘walled garden’). Before that, Valencia had been largely a swamp rich in mosquitoes, but the Muslims channelled the waters of the Turia River, then known as the Guadalaviar, and built dams, watermills and ditches.

Curiously, in the film ‘Kingdom of Heaven’ (some of which was filmed in Spain) it is the Christian Knight Balian (played by Orlando Bloom) who teaches the Arabs the art of irrigation! In fact, the irrigation system used in Valencia was first used by the Syrians in 1000 BC.

In the Roman epoch, the main crops had been cereals, vines and olives, but with the arrival of the Arabs, new crops such as artichokes and aubergines, rice and tiger nuts were cultivated. In fact the idea of ‘horticulture’ is reflected in the Valenciano name for the region “L’horta”.

The waters of the “huerta” are channelled through eight main canals: Quart, Benàger i Faitanar, Mislata, Favara, Rovella, Tormos, Mestalla and Rascanya and conflicts among farmers about their watering rights are resolved (or not) by one of Europe’s oldest courts of law, the ‘Tribunal de las Aguas’, which is held every Thursday morning on the threshold of Valencia Cathedral. In the same square (Plaza de la Virgin), there is a fountain dedicated to the waters of Valencia with the God Neptune as the centrepiece. 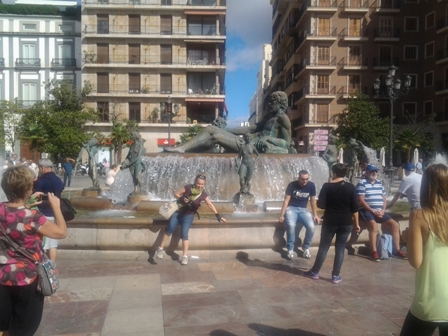 Another fast disappearing feature of the ‘huerta’ is the ‘barraca’, the thatched cottage that was once the typical house of the area. Even as recently as the 1960s, 40% of the population of the village of Alboraya, so famous for its horchata drink made with tiger nuts, still lived in ‘barracas’. Today, the few that remain are maintained as a whim of the owner or as a restaurant or museum.